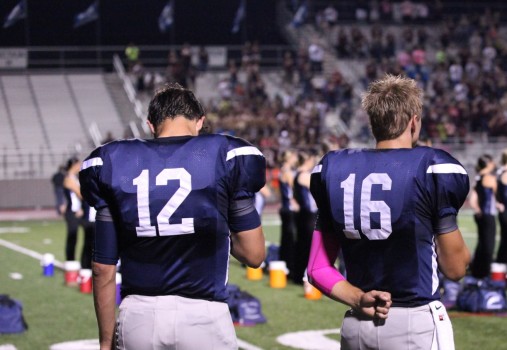 The Flower Mound Jaguars were defeated by the Lewisville Fighting Farmers last Friday at Neal E. Wilson Stadium. The hard-fought game ended with a final score of 25-23.

The lead became Lewisville’s near the end of the first quarter when Fighting Farmer Matt McDougal passed to Cameron Creal for their first touchdown of the night.

Although the Jags quickly added 3 points through a field goal during the second quarter, Lewisville’s Metrick Buhler rushed into the end zone. The Farmers also completed a two-point conversion, making the score 15-9.

At the start of the third quarter, Lewisville’s Tluang Hmung kicked a 33-yard field goal.

Flower Mound then began a scoring drive led by senior running back Michael Smith. The possession ended with a touchdown, making the score 18-16.

The Jaguar defense was able to hold the Farmers for two possessions, but halfway through the fourth quarter, Lewisville had their third touchdown of the night.

With three minutes left in the game, Hofmeister passed to Wanhanen for another touchdown, closing in on Lewisville’s lead.

With three seconds on the clock, Hofmeister threw a 45-yard pass to junior wide receiver Clayton Johnson in the end zone, but it fell incomplete.

The players on the Jaguar sideline hung their heads low as the away bleachers erupted into cheers. With another loss, Flower Mound is now tied with Marcus for last place in the 5-5A District.

Even though the game was close, players consider the loss unacceptable.

“We don’t want to take moral victories,” Wanhanen said. “The game was disappointing for all of us because we expected to win and could have won.”

Despite this, the team played tenaciously.

“We came out to fight and played very well,” senior running back Williams said. “We just needed to execute plays better. We were in the red zone five times but didn’t capitalize on taking all of the chances we get.”

Mistakes the team made weren’t necessarily physical plays, but more of mental faults.

“We lost some momentum as the game went on,” senior linebacker Daniel DeLorimiere said. “It cost us towards the end so we just couldn’t pull through.”

Flower Mound’s next opponent is Coppell, who is 4-1. Players are treating it as just another game, but they are also working on perfecting certain plays during practice this week.

“Coppell is definitely a good team,” Wanhanen said. “We’re going to have to play a perfect game to beat them, but I think we can do it.”

Despite complications with plays in previous games, DeLorimiere has a positive outlook on the remainder of the season.

“People need to know that good things are coming,” DeLorimiere said. “So we’re going put some wins in our column.”

Hoping to start a winning streak, the Jaguars will play against the Coppell Cowboys in their next game.